Until very recently, Mexico City had a reputation for being extremely dangerous and not a place that the casual tourist would imagine visiting. I am glad that I took a chance and visited Mexico City, because the city itself is fantastic and much better than the reports would claim. Many people are starting to discover Mexico City as well: it is getting a well-deserved reputation as a foodie city. In fact, just across from the Hyatt Regency Mexico City at Agua e Sal you can eat amazing ceviche and enjoy a view of the goings on in the neighborhood.

If you are visiting Mexico City, there are a few neighborhoods that you might enjoy for tourism and luxury. The Polanco neighborhood is known as one of the wealthier neighborhoods in Mexico City, and this is where the Hyatt Regency is located. The Hyatt is a high-rise hotel of early 1990s provenance that was recently renovated. It bears all the markers of a typical concrete high-rise Hyatt, but it has been nicely renovated to make it a pretty nice place to spend a night or two in Mexico City. 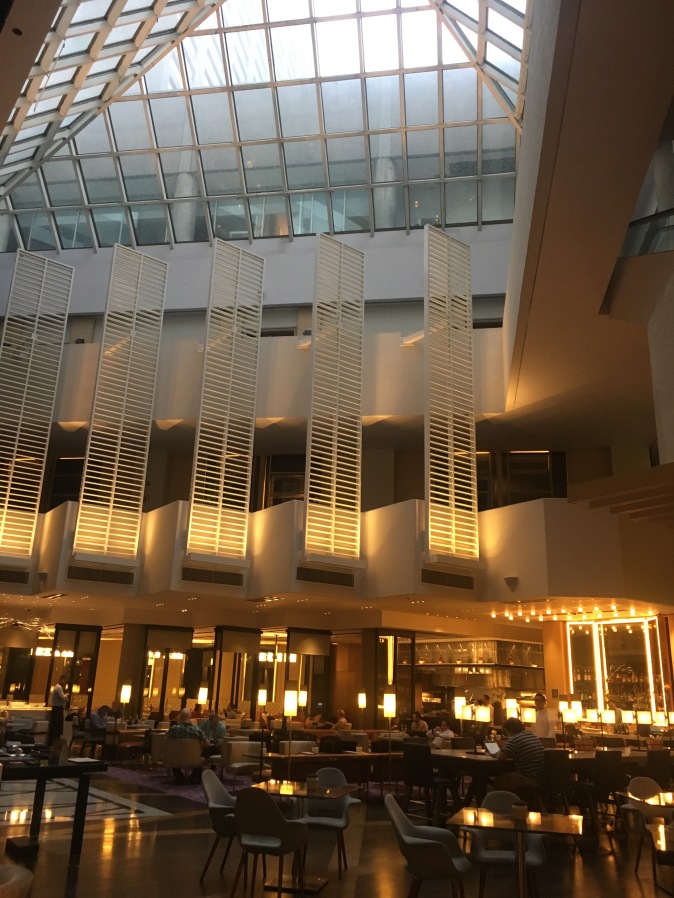 The atrium area of the Hyatt Regency Mexico City hosts a very pleasant bar area with lots of seating for singles and groups. An atrium gives some light during the daytime. There are green walls to give the atrium a jungle-y look. The bar here serves whiskey, tequila, and other cocktails. In the morning, breakfast is served in this area.

The Hyatt Regency Mexico City was a Hotel Nikko in an earlier life, so the rooms have a distinctively Japanese design vibe. Each room is on the smaller side, but there are nice views of the large park outside.

The highlight of the Hyatt Regency Mexico City is the Regency Club Lounge. It doesn’t necessarily look like much, but the views are great and the service is excellent. Unlike many Regency Club lounges, the Hyatt Regency Mexico City features a full spread of freshly prepared appetizers, a hot dish or two, and dessert. And the lounge attendants are very helpful and attentive, pouring whatever beverages you care for without fuss.

All in all, I would recommend the Hyatt Regency Mexico City to anyone who desires to be in the Polanco area (lots of good restaurants and the park and museum are in walking distance). It isn’t the most charming, but it is efficient and pleasant, particularly if you have access to the Regency Club lounge. For charming cafes, you can always venture out of the Hyatt Regency Mexico City to the immediate neighborhood, where there are cafes with outdoor seating like the one pictured below.